Donations are treasured additions to the Mosman Local Studies Collection reflecting the diverse history of Mosman through the personal memorabilia, ephemera, photographs and realia of those who have lived and worked in Mosman.

If you do not wish to part with your valuable piece of local history, we appreciate the opportunity to photograph or copy these significant resources for inclusion in the collection.

These donations have added to our understanding of the heritage of Mosman.

In 1887, the North Shore Gas Company laid gas mains along the main thoroughfares of Mosman. By 1893, street lamps had been mounted on iron standards, installed on each street corner to be turned on at sunset by the lamplighter. In 1903, ruby coloured glass lengths each etched with the street name were mounted on these lamps. 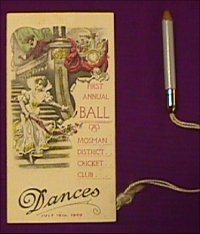 Formed in 1908 The Mosman District Cricket Club held its first Annual Ball in 1909.

This exquisite dance card lists the dances on one side and the names of those wishing to dance with the cardholder.

We do not know who owned this card, nonetheless it is a valuable addition to the collection. 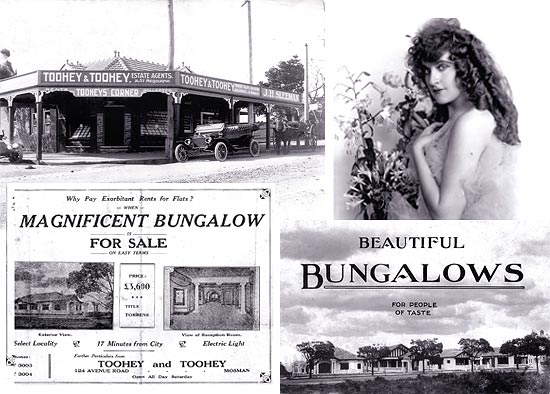 In 1913 William Toohey and his son, Francis opened a real estate agency at 124 Avenue Road, Mosman and in 1915 a branch office at Mosman Wharf. In 1920, they established a building company Homes de Luxe and built five modern bungalows along Bradleys Head Road, Mosman.

In 1918, William returned to Melbourne leaving Francis to manage the business and the following year he married Lola Welby, a Tivoli dancer. The family lived at ‘Ardagh’ 19 Prince Albert Street, Mosman.

Their daughter, Lola, donated a number of photographs, ephemera and a scrapbook dating from 1913 to 1922 containing newspaper clippings relating to Mosman property sales.

Local boy, Charles Thomas Phillippe Ulm, enlisted in 1915 in the 1st Battalion, Australian Imperial Force only to be wounded and honourably discharged a few months later. Once he turned 18 years of age he re-enlisted. In 1928, Ulm was co-pilot on Charles Kingsford Smith’s historic Southern Cross flight across the Pacific Ocean.

In 1928, in recognition of Ulm’s achievements, Mosman Council, presented him with this fine memorial. 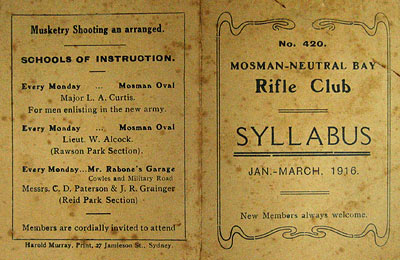 In 1915 The Mosman-Neutral Bay Rifle Club was formed following and received a loan of 150 rifles enabling members to commence training on Mosman Oval. During the First World War 243 members enlisted for active service. The club continues to operate today and its sole purpose is sportsmanship.

In 1924 the Misses Lily Arnold and Jessie Macdonald opened the Garden School in Glen Carron, 30 Stanton Road, Mosman. They were members of The Order of the Star of the East, which had been instrumental in building the Star Amphitheatre overlooking Balmoral Beach. The aim of the school was to provide an all-round education that included eurhythmic dancing and learning Esperanto.

Glen Carron, was originally named Tivoli and had been built in 1893 by Ernest T.H. Rohde, the stepfather of S. H. Ervin. The family lived there until Rohde built another house he also named Tivoli, on the corner of Fairfax and Parriwi Roads that in turn became the home of the ‘Opal King’, Percy Marks.

In 1936 The Garden School closed, the Glen Carron Estate was subdivided, auctioned and the house demolished. These postcards are very rare images of the type of mansion found in Mosman in the 19th Century.